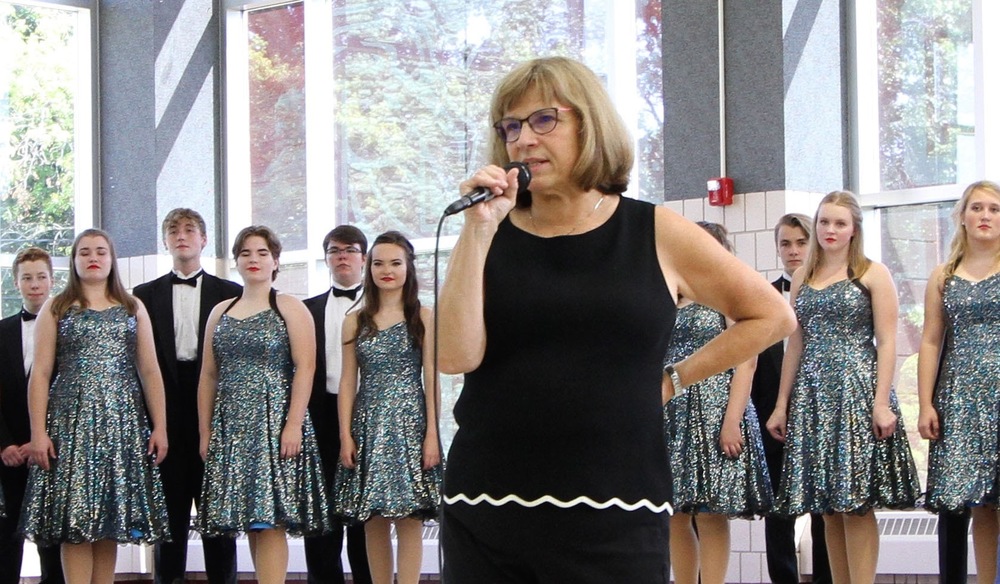 Her choirs have performed all across the Huron Valley over the years: concerts and musicals at Milford High School, of course, but also at numerous business and community organizations, churches and other groups.

“Mrs. Lambrecht puts her whole heart and soul into this program,” said MHS 2021 graduate Joe Antrim. "You can tell she really enjoys it and cares about the finished product. She’s a great role model for dedication and hard work and a huge part of fostering a tight-knit community in the vocal music program.”

A Career with HVS

A Milford resident, Lambrecht came to Huron Valley Schools in 1989, starting as a music teacher at Country Oaks Elementary. She also taught at both Brooks and Baker elementary schools for a time, then, in 2003, moved to Muir Middle School where she helped boost student participation in the vocal music program.

When the vocal music director’s position at MHS opened in 2006, she hesitated. With the Muir program “rocking,” Lambrecht felt content where she was, with much still to accomplish. Plus, she’d experienced the rigors and high standards of the MHS program when her daughter, Sarah, a 2003 MHS grad, spent three years in the school’s Center Stage choir.

But after a great deal of thought and some encouragement from colleagues, Lambrecht stepped into the role.

“I was nervous,” she said. “I initially didn't see myself as a high school teacher. But then it was everything I was good at and all the things I love. I worked really, really hard in those early years and I learned so much. It ended up being a joyful experience, with me being where I was always meant to be.”

At MHS, Lambrecht headed up the Concert Choir and the Men’s Ensemble group, as well as the audition-based Center Stage and Choraleers. Between classes, rehearsals, voice lessons and all the required paperwork, along with an ongoing schedule of concerts and musical productions, Lambrecht often averaged 14 hours per day.

“She’s always offering to the kids, ‘If you need extra time or extra help, come see me,’” said Brenda Granroth, Lambrecht’s longtime accompanist. “She teaches lessons outside the school day for free. She’ll be there as late as needed.

“I don’t think the kids have any idea how much time she gives behind the scenes,” Granroth added.  “If something’s going on in their life, she’s always wondering if they’re OK.  If she notices someone’s having a bad day, she wants to help. It’s not just about the music.”

Interwoven with her formal education, Lambrecht was performing in regional operas, substitute teaching, getting married and becoming a mother. At 34, she began her full-time teaching career with Huron Valley Schools.

Colleagues say she arrived at Milford High School at the right moment.

“It was clear right from the beginning that Maryann was exactly what we needed to grow our performing arts department into the award-winning powerhouse it is today,” said Megan Weeks, MHS teacher and theater director. “Her commitment to excellence never wavers and her choral groups and soloists have earned countless awards and top honors.  She has had several students reach the elite level of the All-State Honors Choir and All-State Jazz Choir.”

The achievements of her students, Lambrecht said, were worth every hour she poured into the program. Her proudest moments came when her choir was invited to participate in the 10th anniversary of the Michigan Music Conference, bringing statewide recognition to Milford High School.

“She immersed me in many different styles of music and opened my eyes to a lot of things,” Richardson said. “When I was nervous to audition or to compete, she helped me work on my technique.”

Ultimately, he ended up placing in the  solo ensemble competitions Lambrecht encouraged.

“If it wasn't for her, I probably wouldn't have done it, because I didn’t know I could excel,” he said. “She always went that extra mile to make sure students were achieving their dreams and exceeding their own expectations.”

“It gives everyone a place to share their story and be known, and that is invaluable,” she said. “I totally believe in the importance of this. With all my heart I do. If I ran the world, everyone would be involved in the arts.”

After a recent performance, Lambrecht said she woke with the sound of the singing student voices in her head.

“I am sure I will miss that,” she said. “I had the privilege of listening to the beautiful voices of my choirs on a daily basis and often thought, ‘This is a great job!’ To have a day filled with creating beautiful music, truly, one's life could not be better than that.

“I worked with so many exceptional people,” she added. “Colleagues, students, parents, custodians, and bus drivers, administrators and Central Office. All of them were working very hard so the students and I could stand and receive the applause.”

But at 66, she said, it’s time to retire. Her plans include a bit of traveling and visiting, some minor home renovations and lots of gardening and time with her husband Gil.

“I’m looking forward to waking up in the morning without an alarm, staying up late reading a great book or going to a show,” she said. “My gardens will be beautiful and I will have enough time to do all the things I have always put on hold.”

Freedom, she said, is the magic word.